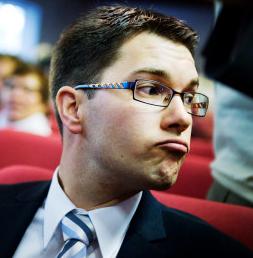 Sweden’s far-right leader on Wednesday called for a fight against Islamic extremism at a parliamentary debate in connection with the December suicide attack in Stockholm.

“Terrorism is not an isolated threat. It is a form of Islamic tactic and it is Islamism as a political ideology that needs to be fought and mapped out,” Sweden Democrat leader Jimmie Åkesson said.

Åkesson, whose anti-immigration party burst onto the Swedishpolitical scene after the September election, acknowledged that only an extremely small portion of the world’s 1.3 billion Muslims committed terrorist acts, but said many more “sympathise with Islamism.”

Åkesson, whose Sweden Democrats’ requested Wednesday’s parliamentary debate following the country’s first-ever suicide attack, insisted an important debate had been stifled in Sweden by “a fear of being branded Islamophobic.”

Green Party parliamentarian Maria Ferm blasted Åkesson for “trying to connect the typical picture of a terrorist to the Muslim man,” insisting that only 0.34 percent of all terror attacks in Europe are committed by Islamic extremists. Most attacks, she said, were carried out by rightwing and leftwing extremists.