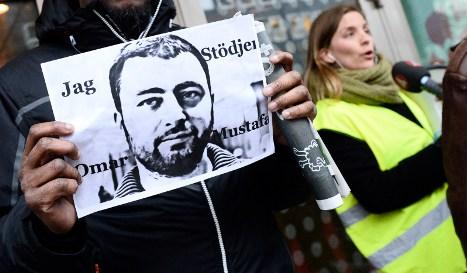 Dozens of demonstrators gathered outside Social Democrat headquarters in central Stockholm on Monday night, while others took to the opinion pages of a Swedish daily to protest the ouster of Omar Mustafa over questions about his values.

Nearly 100 people marched outside party headquarters on Sveavägen behind a banner with the text, “Social democracy, yes. No to Islamophobia.”

“It’s Social Democrats protesting against the witch hunt and against all the lies that are being spread about Omar,” Anna Ardin, vice chair of Social Democrat religious group Hjärta – troende socialdemokrater (‘Heart – Social Democrats of faith’), told the TT news agency.

Mustafa, who also chairs Sweden’s Islamic Association (Islamiska förbundet), landed at the centre of the Social Democrats’ latest controversy just days after being elected to the party’s governing board when reports emerged about the Islamic group’s decision to invite speakers to Sweden with known anti-Semitic views.

As concerns from within the party mounted following additional reports that the Islamic Association’s bylaws state that men and women have different legal status, party leader Stefan Löfven issued an ultimatum on Saturday. Mustafa resigned from the party later the same day, less than a week after his election to the governing board.

According to Ardin, the treatment of Mustafa amounts to a form of Islamophobia.

“The view has spread that one can’t be a part of organized Muslim civil society and a Social Democrat at the same time. It’s important for Stefan Löfven to deny this and show that he has confidence in Omar,” Ardin told TT. “The most serious aspect is that it seems we’ve caved in the face of this witch hunt.”

Demonstrator Malika Moor has supported the Social Democrats for 36 years, but said she wouldn’t vote for the party today. “I don’t understand why it’s come to this. It might be because his name is Omar, because he’s an immigrant, or a Muslim. I really want the Social Democrats to explain this to us,” she told TT.

Meanwhile, 29 active Social Democrats signed an open letter published on Tuesday in the Svenska Dagbladet (SvD) newspaper taking issue with the party’s management of the situation.

According to the authors, it’s unacceptable that someone elected at a party congress should be forced to resign due to unfounded criticism from party colleagues and media hype.

They demand the party leadership distance itself from the accusations directed toward Mustafa and express their confidence in him. The authors also want those who published the unfounded accusations to apologize.

“We state with sorrow and anger that Mustafa was forced to leave the party’s governing board,” they wrote.