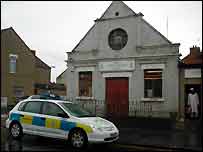 A racist thug who tried to firebomb a mosque and daubed sick graffiti on its walls was jailed yesterday.

Mark Bulman, 22, got five years for the attack in which he wrote “Go to Auschwitz” and “Allah is a pervert” on the building.

He also painted a Nazi swastika on its walls after smashing a window and lobbing in a petrol bomb. But it failed to explode in the empty building.

Another article from the Advertiser sheds a revealing light on the British National Party’s new “respectable” image. A couple of months earlier, when a teenager was convicted of an arson attack on the same mosque, a spokesman for the Swindon branch of the BNP had stated: “We just want to say that justice has been done and he deserves to be locked up for this attack on the Muslim community.” And who was this BNP spokesman? None other than Mark Bulman.