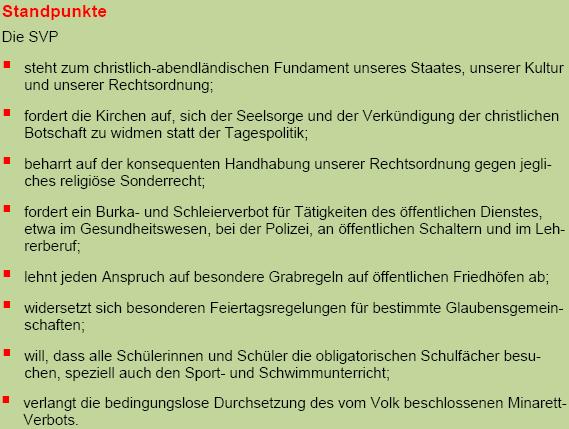 A year after Swiss voters approved a ban on the building of minarets, both pro and contra groups are launching new campaigns to put the issue back on the political agenda.

An anti-minaret movement led by Ulrich Schlüer of the rightwing Swiss People’s Party presented a manifesto on Monday against the Islamisation of Switzerland. The document underlines Switzerland’s Christian foundations and aims to prevent the creation of a parallel society inspired by Islamic sharia law.

Schlüer said the group had waited a year in vain for the government to implement the minaret ban. A sign of the lack of progress was the green light canton Bern gave in September to the building of a minaret in the town of Langenthal, the politician said. The Bern authorities argued at the time that planning permission was originally granted months before the controversial vote.

Also on Monday, an Islamic group based in Bern said it was launching an initiative to lift the minaret ban. The Islamic Central Council – which represents 13 Islamic organisations with 1,700 members – said the aim of the initiative was to restore “the constitutional right of equality of all citizens regardless of their religious faith”.

The council said it would submit a text to the federal chancellery in January for initial examination. If the group decides to go ahead, it will have to collect 100,000 signatures within 18 months in order to force a nationwide vote.

More than 300,000 Muslims reside in Switzerland. When it is completed, the Langenthal minaret will be the fifth in the country.

The SVP manifesto claims that there are 400,000 Muslims living in Switzerland, that their number has “increased rapidly through immigration, family reunification, forced marriages and a high birth rate”, and that Muslims have brought with them “ideas about law and order that are incompatible with our legal system and our democratic rules”.

The SVP declares that “the toleration and even promotion of practices such as forced marriages, honour killings, blood revenge, female genital mutilation and underage or polygamous marriages in this country is absolutely unacceptable” and denounces “the cowardly, intimidated stance of certain politicians, journalists and religious leaders” who have supposedly accepted such practices.

In addition to demanding the unconditional implementation of the minaret ban and opposing sharia law, the SVP manifesto rejects any concessions to Muslims over cemeteries or religious holidays, insists that Muslim schoolchildren should be forced to sing Christmas carols, and calls for a ban on the wearing of the veil by public service employees including healthcare workers, police and teachers.