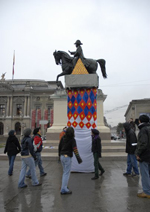 The Network of Genevan Youth Associations (GLAJ) immediately registered its shock at the result of the Swiss referendum on the banning of minarets by erecting a minaret made of cardboard, wood, paper and tissue in Geneva’s New Square.

The site of the symbolic minaret was deliberate; it was placed at the feet of the statue of General Dufour on a horse. Dufour is a Swiss national hero who presided over the first Geneva Convention which established the International Red Cross.

The young people, all of whom were too young to vote in the referendum, wanted to express their dismay at the ‘vote of shame’ through this symbolic action. As all shops were closed, they had worked through the night collecting whatever materials they could find on the streets of Geneva to build the minaret. GLAJ says more actions will follow and will be posted on Facebook.

Now other young people are joining the protest, bringing with them their own minature minarets upon which they have written messages. Among the messages inscribed on one was an extract from the Tunisian national anthem, written by the celebrated poet Abou El Kacem Chebbi, “When a people want their life, the force of destiny responds. The shadows dissolve and the chains break.”