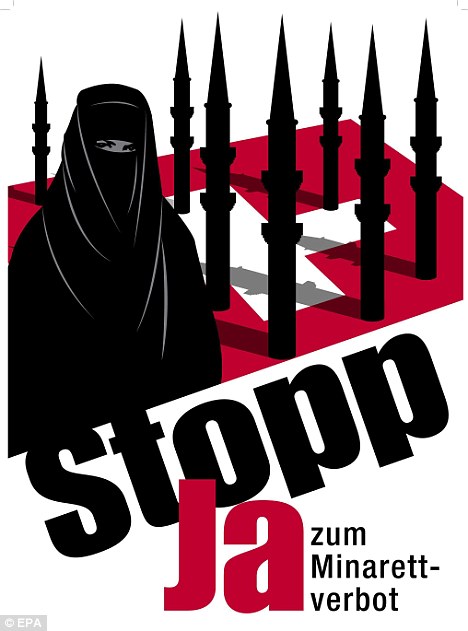 “Over the last two decades Islam has become connected to so many controversial debates – violence, extremism, freedom of speech, gender discrimination, forced marriage, to name a few – it is difficult for ordinary citizens to embrace this new Muslim presence as a positive factor. There is a great deal of fear and a palpable mistrust. Who are they? What do they want? And the questions are charged with further suspicion as the idea of Islam being an expansionist religion is intoned. Do these people want to Islamise our country?

“The campaign against the minarets was fuelled by just these anxieties and allegations. Voters were drawn to the cause by a manipulative appeal to popular fears and emotions. Posters featured a woman wearing a burka with the minarets drawn as weapons on a colonised Swiss flag. The claim was made that Islam is fundamentally incompatible with Swiss values. (The UDC has in the past demanded my citizenship be revoked because I was defending Islamic values too openly.) Its media strategy was simple but effective. Provoke controversy wherever it can be inflamed. Spread a sense of victimhood among the Swiss people: we are under siege, the Muslims are silently colonising us and we are losing our very roots and culture. This strategy worked. The Swiss majority are sending a clear message to their Muslim fellow citizens: we do not trust you and the best Muslim for us is the Muslim we cannot see.

“Who is to be blamed? I have been repeating for years to Muslim people that they have to be positively visible, active and proactive within their respective western societies. In Switzerland, over the past few months, Muslims have striven to remain hidden in order to avoid a clash. It would have been more useful to create new alliances with all these Swiss organisations and political parties that were clearly against the initiative. Swiss Muslims have their share of responsibility but one must add that the political parties, in Europe as in Switzerland have become cowed, and shy from any courageous policies towards religious and cultural pluralism. It is as if the populists set the tone and the rest follow. They fail to assert that Islam is by now a Swiss and a European religion and that Muslim citizens are largely ‘integrated’. That we face common challenges, such as unemployment, poverty and violence – challenges we must face together. We cannot blame the populists alone – it is a wider failure, a lack of courage, a terrible and narrow-minded lack of trust in their new Muslim citizens.”