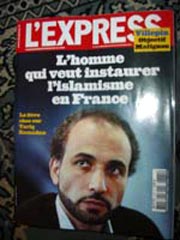 Swiss Muslim intellectual Tariq Ramadan is at the center of a vile campaign by rightist French magazines and newspapers, which accuse him of spearheading what they called the political Islam drive in Europe.

Seeking to blemish his reputation after he had been catapulted into the limelight as a paradigm for moderate Muslims, L’Express magazine ran a front-page photo of Ramadan titled, “The man who wants to establish Islamism in France”.

The ferocious attack came hard on the heels of Ramadan’s success in grabbing the attention of the third round of the European Social Forum, which concluded on October 17. Ramadan took part in three fringe symposiums, calling on Muslims in Europe to fully integrate into their societies, stop casting in the victim mould and get rid of the minority complex.

L’Express further published excerpts from Ramadan’s lectures and seminars recorded on audio tapes, branding them as an outspoken call for Islamizing French society.

The magazine wondered how “such a handsome Muslim guy managed to win the hearts and minds of people in French suburbs and got much media attention”.

The “Ramadan file” in L’Express also coincides with the release of a new book criticizing the famed Muslim figure as a “fundamentalist”. In her book entitled “Brother Tariq”, Caroline Forest attacked what she called Ramadan’s bids to suppress public freedoms.

“The power of Ramadan lies in the fact that he doesn’t leave the impression of being a fundamentalist,” Forest told L’Express. “Nobody is more capable of Islamizing French society and gaining ground for fundamentalism than Ramadan.” She further played on Ramadan’s ancestry as the grandson of the founder of the Muslim Brotherhood Hassan Al-Banna.

Quizzed on his soaring popularity among the Anti-Globalization Movement and the Leftists, the writer dodged the question, saying Ramadan got much sympathy when he was denied a French visa in 1995 by the then interior minister.