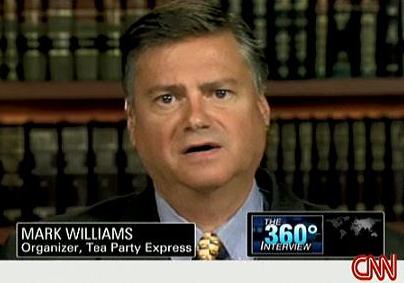 Mark Williams, chairman of the Tea Party Express, took to his blog to spew hate at Stringer after the politician compared him to Adolf Hitler at a press conference last week. Williams countered that Stringer is a “sniviling [sic] worm” and “a Jewish Uncle Tom who would have turned rat on Anne Frank.”

Stringer vowed not to back down from “a thug” like Williams and expressed surprise that the Tea Party hasn’t booted him. “He’s a bigot whose mission in life is to divide society,” Stringer said. “He works at sowing seeds of racial and religious hatred.”

Williams set off a feud last week when he blogged that the proposed mosque and Islamic cultural center would be a monument to the 9/11 attackers “for the worship of the terrorists’ monkey-god.”