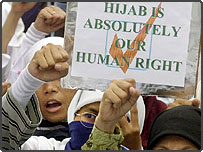 As you might anticipate, there is the usual racist crap: “… the real intention of this apparel is to denigrate women and deny them their individuality. As a Western woman, I regard this apparel as insulting to my sex, my religious beliefs and my cultural mores. If Muslims wish to enjoy the manifold benefits of living in the West, they must both respect and observe our customs as well as our rules.” (Katherine Barlow, Vienna, Austria)

However, some letter writers take a very different line:

“It will be a very poor outcome for all of us if we, the British people, allow ourselves to be manipulated by this campaign into attacking Muslim women. I would hope that the ideals inherent in the whole of our British culture would continue to respect women of all races, colours and creeds. Whatever these terrorists think, we are now a multicultural society…. Muslim women should not discard their hijabs. Otherwise the terrorists will have won.” (Geoffrey Collingwood, Brackley, Northants)

“Katherine Barlow (Letters, Aug 5) regards Muslim women’s apparel as an insult to her mores. I am English and have lived here all my life. I prefer not to wear the cleavage-displaying, thigh-revealing garb favoured by many of my compatriots. If I can choose to dress how I please, why on earth should Muslim women be criticised for similar choices?” (Linda Garrett, Potters Bar, Herts)

It’s a disturbing thought that there are Torygraph readers who take a much more progressive position on this issue than many liberals do.