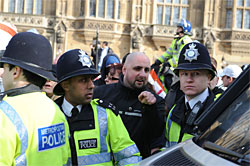 The man in this picture is Chris Renton. He was photographed on the racist English Defence League (EDL) march on parliament last Friday.

Renton is a well known member of the British National Party (BNP) – and he is also on the leadership team of the EDL. In fact, Renton was one of the group’s founders. He runs the EDL’s Facebook pages and set up the EDL website and forums.

The BNP and EDL deny any links with each other. But the fact that this BNP Nazi is central to the EDL proves otherwise.

In a radio interview in July 2009, then EDL spokesperson Paul Ray confirmed that Renton was a BNP activist. And Renton is not the only fascist central to the EDL. Davy Cooling, the administrator of the EDL’s Luton Facebook site, is also on the BNP membership list. Many other known BNP members were spotted on the EDL’s march in London.

This is more proof that the EDL is a dangerous organisation with fascism at its core.

Cf. Robert Spencer’s assurance that “the EDL is standing up for human rights, for the freedom of speech, for Western civilization, for Israel, and for the defense against the global jihad and the Islamization of Britain. There is no credible evidence that this group is racist or fascist in the slightest degree.”