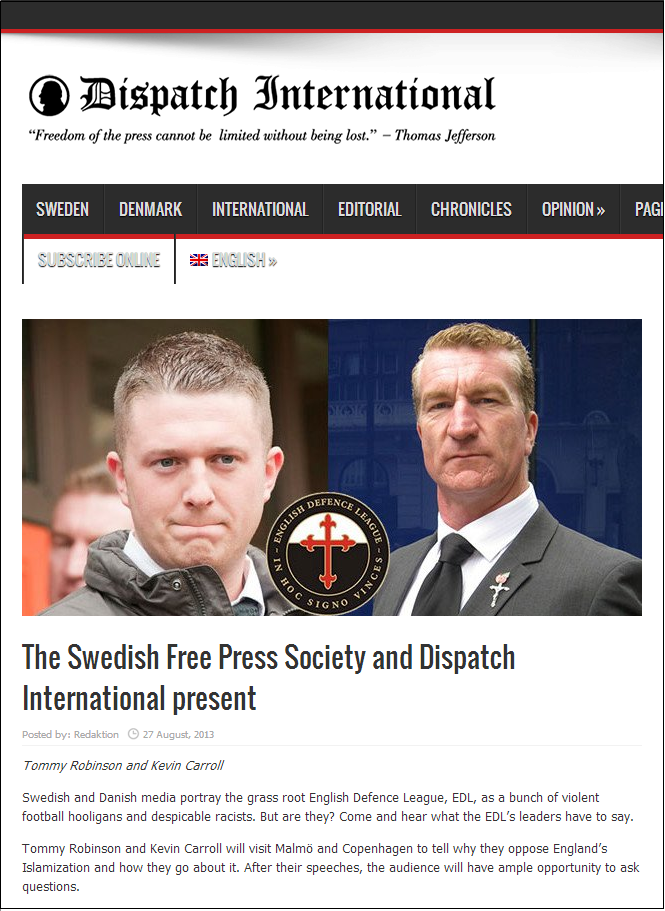 Two weeks ago the self-styled Free Press Society and its Danish/Swedish publication Dispatch International announced that they have invited Stephen Lennon and Kevin Carroll to visit Scandinavia for a speaking tour later this month. The English Defence League leaders are to address meetings in Malmö and Copenhagen where they will explain “why they oppose England’s Islamization and how they go about it”.

Dispatch International was launched in August 2012, with Ingrid Carlqvist and Lars Hedegaard as editors, to serve as an organ of the international “counterjihad” movement. The far-right Sweden Democrats party (which observed that it had “many connections … both personal and ideological” with the Free Press Society) was so impressed with the new publication that it sent a free copy to each of its six thousand members. Challenged at a press conference over whether he was happy distributing a newspaper that compares Islam to Nazism, Sweden Democrats spokesperson Richard Jomshof said he thought this was “a perfectly reasonable comparison”.

The first issue of Dispatch International featured an article by Paul Weston, at that time the chairman of the now defunct far-right British Freedom Party, whose joint vice-chairmen were Lennon and Carroll. Weston was also the author of an earlier article entitled “The ethnic cleansing of the English” in which he claimed that the “indigenous race” was under threat from a government who “praised multiculturalism as a positive”, had “thrown open the doors of this tiny country to the teeming billions of the poverty-stricken third world”, and had “enacted ‘hate’ laws which are then predominately used to criminalise and silence the indigenous people who speak out against their territorial and cultural dispossession”.

… multiculturalism is a state-sanctioned tool used to encourage division to an extent that amounts to Apartheid; to destroy the Nation State; to politically and mentally disarm the native and indigenous populations and to ensure the total breakdown of civil society….

Under the edicts of multiculturalism, native Europeans are rendered shameful, guilty, faithless, disunited and weak, whilst Muslims are made to feel proud, united, faithful and strong. If demographics and multicultural apartheid continue along their present paths then there will inevitably come a day when comparable numbers of the proud, fanatical and strong will confront the guilty, faithless and weak.

There can only be one outcome if this happens. We can do little about the demographics, but we can certainly expose multiculturalism as a totalitarian ideology of racial and cultural genocide. Only once this is accepted by the electoral majority can we begin to reclaim Western Civilisation.

It’s not difficult to understand why this article should appeal to Carlqvist and Hedegaard. The latter, you may recall, achieved notoriety over his comments about “Muslim rapists” during a 2009 interview with the editor of the Snaphanen website, in which Hedegaard stated:

When a Muslim man rapes a woman, it is his right to do so…. A loose woman, a woman who is not under the protection and the guidance of her guardian is basically free to be raped. If she moves around in the city without any guardian, you can freely rape her. She is your slave…. Sweden I think is probably the most prominent example of this in the West, where Swedish girls are raped. Gang-raped etc. etc. There is nothing wrong in it, viewed from an Islamic perspective. This is your right. You are even obliged to do that.

Hedegaard went on to claim that Muslims “rape their own children”. He told Snaphanen:

You hear that all the time, that girls in Muslim families are raped by their uncles or their cousins or their father…. Women are basically, how can I describe it? They have no value. They are not human beings. They have a function as wombs. They bear the offspring of the warriors in order to create new warriors. Other than that – well, they can be used for sexual purposes, but they have no value. No human value.

As a result of these statements Hedegaard was prosecuted, and convicted, on a hate speech charge. However, his conviction was later overturned on the technical (and frankly incomprehensible) grounds that he had given the interview to Snaphanen without being aware that his comments would be made public.

As for Carlqvist, she may have a lower profile than Hedegaard outside of Scandinavia, but she entirely shares his viciously bigoted views, being extremely vocal in blaming Sweden’s social problems on immigration – and in particular on “this huge immigration from low IQ countries”, as she puts it. Earlier this year Carlqvist provoked a Twitter debate over her claim that migrants are disproportionately involved in criminal activity in Sweden, a charge that was devoid of statistical evidence. When one critic accused Dispatch International of employing the same methods as Der Stürmer, which distorted the facts in order to incite hatred against Jews, Carlqvist retorted that whereas the Swedish government was suppressing the facts about Muslims and crime, “the Nazis found out things about the Jews”.

Alas, things haven’t been going too well for Carlqvist and Hedegaard recently. Having booked the Malmö Konferenscenter for the Swedish leg of the EDL leaders’ speaking tour, Dispatch International received the following email from the management: “After being informed that your arrangement on September 28 is a presentation by the extreme right organization, the English Defence League … we have decided that we will have nothing to do with organizations of this type. We therefore cancel your booking for the arrangement.” The Odd Fellow Palæet in Copenhagen followed suit, depriving Dispatch International of a platform for Lennon and Carroll in Denmark as well.

Carlqvist and Hedegaard say they have found alternative meeting places for the EDL leaders in both Malmö and Copenhagen, but they are keeping the details secret until a few hours before the events start, evidently in the hope that management at these venues won’t find out what sort of meeting their premises have been hired for.

On top of this, Dispatch International faces the prospect of its PayPal account being closed, following complaints by supporters of the Slutpixlat website that the publication is in breach of PayPal’s ban on the promotion of racism and xenophobia. When PayPal contacted them to ask for full access to material on the Dispatch International site, Carlqvist and Hedegaard indignantly refused to co-operate, no doubt because the articles they had published would just have confirmed the accuracy of Slutpixlat’s charges. “Rest assured that your fealty to Sweden’s totalitarian left will not go unnoticed”, was the editors’ rather threatening response to PayPal.

Still, even though their hate-mongering and far-right links have led to their repudiation by mainstream society, Carlqvist and Hedegaard are not entirely friendless. One British-based author has shown her solidarity with these anti-Muslim extremists by contributing an article entitled “Sharia law riding high in Britain”, which appeared on the Dispatch International website last Sunday. In a passage that fitted in well with the journal’s hysterically Islamophobic message, the author wrote:

In the guise of multiculturalism, Britain has encouraged an entirely separate existence for its Muslim citizens. Sharia law now governs large swathes of Muslim life in Britain…. The men who run sharia in the UK openly call for an Islamic British state and unashamedly seek stoning as punishment for adultery or pre-marital sex….

Forced marriages of girls as young as 5, death threats ignored, genital mutilations, and sharia law are being facilitated by the British establishment. Anyone who criticises such practices will, more often than not, be labelled a racist or a fascist, arrested for “causing offence”, or find themselves subjected to violent threats. Welcome to multicultural Britain.

And who do you suppose wrote that article? It’s none other than Anne Marie Waters, One Law For All spokesperson and member of the National Secular Society council.

This is the woman who was recently on a shortlist of two for the selection of a Labour parliamentary candidate in the Brighton Pavilion constituency. Thankfully, and perhaps in part due to a timely exposure of her rabidly Islamophobic views by Socialist Unity‘s Andy Newman (see here and here), Waters was rejected by Labour party members. Otherwise, we would have faced the frightening possibility of the “counterjihad” movement acquiring its own representative in the House of Commons. Hopefully the party will bear this in mind if Waters ever puts herself forward for another seat. 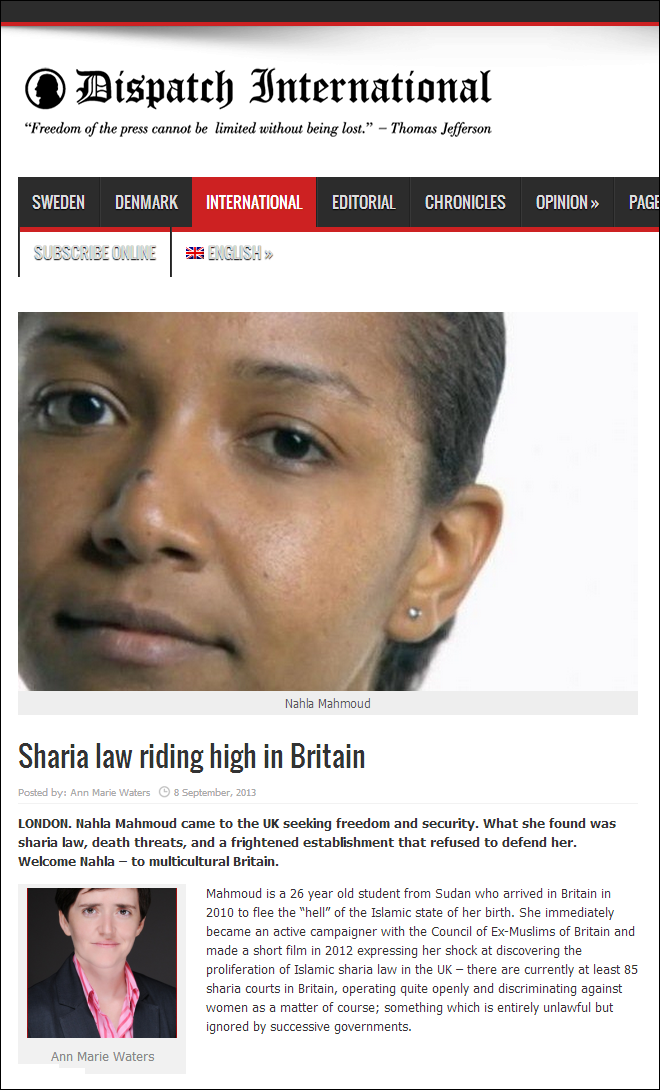