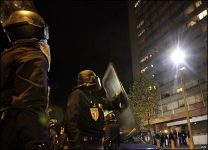 “… for a white Frenchman who’s technically a Catholic but probably an agnostic, it must be depressing to open the newspaper each morning and read yet another headline about an alien creed that seems intent on imposing itself on his country. If it’s a really ‘class’ newspaper like Le Monde, the editorial will probably inform him that the fault for this state of affairs is largely his own and that he will soon be expected to pay the price economically while redoubling his efforts to be exquisitely sensitive about all things Muslim. How long he’ll put up with this, that is the question.”