On the principle that you can never have too many inaccurate scaremongering articles about Muslim extremists taking over the London borough of Tower Hamlets, the Daily Mail presents its readers with a re-run of the paranoid report it published less than a month ago. This one appears under the headline “Tower Hamlets Taliban: Death threats to women who don’t wear veils. Gays attacked in the streets. And all in a borough at the heart of Britain’s capital…”

But, to be fair, the Mail doesn’t suggest that the takeover by Muslim extremists is restricted to East London. It has another article, mainly about the Balsall Heath area of Birmingham, entitled “Censored! Bikini advert blacked out with spray paint by ‘Muslim extremists who object to women in swimsuits'”.

Needless to say, these irresponsible reports are seized on by the EDL: 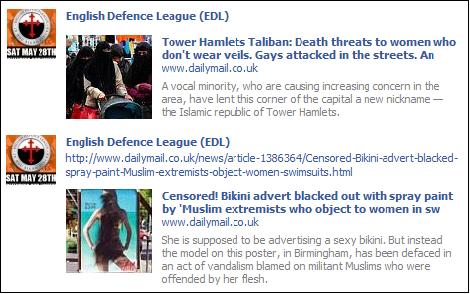