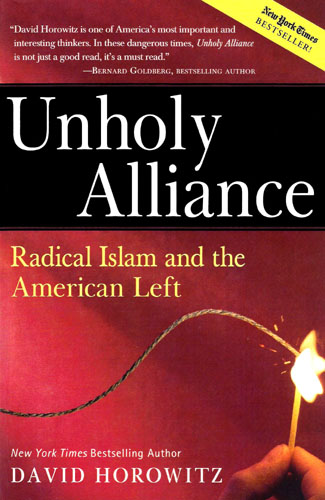 Carol Devine-Molin joins the chorus of right-wingers who applaud the role of former US radical David Horowitz in exposing “the collaboration that exists between Islamo-fascists and Leftists”.

Shamefully, these Leftists have opposed “a righteous war to liberate the Iraqi people from tyranny, enforce UN resolutions, stabilize a region, and oust a dictator that was clearly funding and harboring terrorists”. By contrast, “the Bush administration and its supporters believe that democratization of the Middle East and concomitant free markets will provide Muslims with greater opportunities and improvement in their overall quality of life. And the majority of Iraqis are clearly on the same wavelength and conducive to the Bush plan”.

Yeah, sure. That must be why the majority of those Iraqis who voted did so for parties calling for an end to the US occupation and opposing the handover of Iraq’s assets to foreign corporations.

But the “Hitler-Stalin pact” business – that rings a bell. Where have we heard that one before? Oh yes, I remember. It was our friend Nick Cohen, berating the Left for engaging with the leaders of faith communities that are under attack: “You have to go back to the Hitler-Stalin pact of 1939 to find a similar accommodation with the dictatorial right.”

So Cohen finds himself in a bloc with the most viciously pro-imperialist, neo-conservative, Islamophobic right-wingers … in accusing the Left of forming a bloc with the Right!