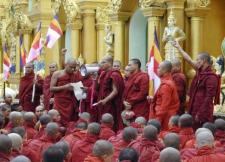 Here’s an interesting article on the position of the Muslim minority in Burma, which points out that media coverage of recent events in that country demonstrates that there are “some hard stereotypes which affect how the mass media represent religions … Buddhism is the most peaceful religion; Islam the aggressive and violent”.

While the author makes clear that the primary responsibility for the current oppression of the Rohingya Muslims lies with the Burmese military regime, he also observes that there is a history of Buddhist monks organising pogroms against the Muslim minority:

“Muslims in Burma are not considered to be citizens. They have no rights and often suffer discrimination and indiscriminate killings. Many of them, in particular after 1962, had to flee the country and still today live in refugee camps in Bangladesh, which actually do not welcome them. Although Muslims have taken active part in the 1988 revolt, and paid the consequences more than the Buddhist population, the majority of monks and Buddhists in Burma have anti-Muslim sentiments, in particular based on the fear of possible intermarriages.

“Pamphlets glorifying race purity and Buddhism and actually reinforcing anti-Muslim sentiments have been distributed since 2001 (i.e. Myo Pyauk Hmar Soe Kyauk Hla Tai or The Fear of Losing One’s Race). These inflammatory publications, preaching against the Muslim minority, as well as rumors spread about Muslims raping children in the streets, provoked a series of monk-led riots against Muslim families and the destruction of mosques. Muslims were killed and mosques destroyed, and again the Rohingya Muslims had to flee to Bangladesh.”