This demonstration outside Dewsbury Magistrates’ Court tomorrow has been organised by the Yorkshire Division of the English Defence League in protest against Azhar Ahmed, the young man charged with a “racially aggravated public order offence” over a Facebook comment which, while arguably “threatening, abusive or insulting”, involved no actual racial element at all. (The EDL held a small demonstration against Ahmed in Dewsbury on Saturday which resulted in two of their members being arrested for causing criminal damage.)

Here is Azhar Ahmed’s Facebook comment, posted in response to the deaths of six British soldiers in Afghanistan:

People gassin about the deaths of Soldiers! What about the innocent familys who have been brutally killed.. The women who have been raped.. The children who have been sliced up..! Your enemy’s were the Taliban not innocent harmful [sic] familys. All soldiers should DIE & go to HELL! THE LOWLIFE FOKKIN SCUM! gotta problem go cry at your soldiers grave and wish him hell because thats where he is going.

Here, for comparison, is a selection of comments from the EDL’s Facebook page advertising tomorrow’s protest against Ahmed, some of which were posted a week ago, with no attempt by the EDL admins to delete them: 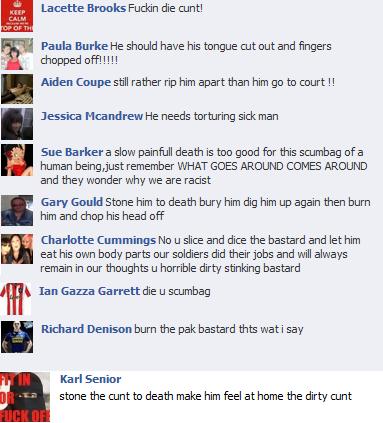 The charge against Ahmed has been brought by West Yorkshire Police whose chief constable, Norman Bettison, heads a special unit that monitors the internet for signs of violent extremism. Bettison recently told the Yorkshire Post that messages posted on the internet by the EDL rarely warranted prosecution as they are merely “inappropriate, brash or insensitive”. All you can say is that if Bettison and his staff haven’t found any more serious internet activity by the EDL than that, then they can’t have been looking very hard.

The EDL regularly work themselves up into a state of indignation over what they claim is a “two-tier system” when it comes to the application of British justice. By that, of course, they mean that the law discriminates in favour of Muslims against non-Muslims. In reality, as we see here, there are indeed double standards but they are precisely the reverse of what the EDL claims.

A young Muslim is prosecuted for posting an abusive comment about British soldiers killing civilians in Afghanistan, but EDL supporters are allowed to post death threats against him in response without the police bringing any charges at all. This is the real “two-tier system” in operation.