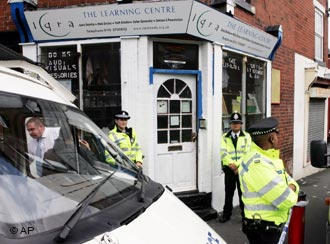 “On 15 July, Blair’s Britain of the future was glimpsed when the police raided the Iqra Learning Centre and bookshop near Leeds. The Iqra Trust is a well-known charity that promotes Islam worldwide as ‘a peaceful religion which covers every walk of life’. The police smashed down the door, wrecked the shop and took away anti-war literature which they described as ‘anti-western’.

“Among this was, reportedly, a DVD of George Galloway addressing the US Senate and a New Statesman article of mine illustrated by a much-published photograph of a Palestinian man in Gaza attempting to shield his son from Israeli bullets before the boy was shot to death. The photograph was said to be ‘working people up’, meaning Muslim people.”