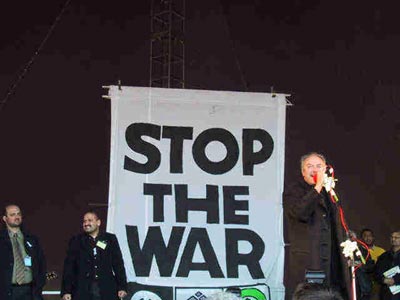 Under the headline “The twisted logic of Galloway” (“Outrage as he claims capital has ‘paid the price’ of war on Iraq”), the Daily Mail denounces George Galloway’s statement on the London bombings.

The Mail is appalled that Galloway should point out: “We argued, as did the security services in this country, that the attacks on Afghanistan and Iraq would increase the threat of terrorist attack in Britain. Tragically Londoners have now paid the price of the government ignoring such warnings.”

Ironically, the same issue of the Mail features an article by Max Hastings which makes an almost identical point:

“We must acknowledge that, by supporting President Bush’s extravagances in his ill-named War On Terror and ill-justified invasion of Iraq, Blair has ensured that we are in the front line beside the U.S., whether we like it or not. We could help to stem recruitment to Al Qaeda by achieving a more constructive engagement with Muslim nations…. But … Bush’s bellicose rhetoric, his commitment to crude military might as a means of imposing his vision of U.S. universalism on the world, form a huge obstacle…”

Of course, the practical conclusions drawn by the two authors are rather different. Galloway calls for the withdrawal of troops from Iraq, Hastings for a crackdown on civil liberties.