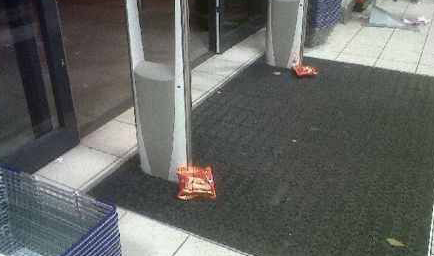 A security guard and English Defence League activist was sacked after he left pork scratchings outside a Liverpool supermarket – in a bid to deter Muslim customers.

Kurtis Cawley will no longer be stationed at Tesco Metro, in Kensington, after his racist rants were revealed.

He was suspended by bosses following his sick diatribes and dismissed for gross misconduct last Friday.

Today, the ECHO can reveal how Cawley, who also masqueraded under the name “Kyle Huyton”:

Today, the supermarket giant told the ECHO that Cawley, a Liverpool EDL co-ordinator, was no longer stationed at their store.

The north London-based company confirmed Cawley had been suspended immediately after the allegations came to light in mid-January.

In response to the controversy, the Liverpool English Defence League issued a statement denying the allegations.

It suggested Cawley had left the EDL last year and the profile of Kyle Huyton had been instead established as a “divisional gimmick” to deliberately distract their opponents and critics.

But that explanation was at odds with evidence online which saw Cawley accidentally referring to himself and Kyle Huyton as one and the same person.

The same Kyle Huyton and Kurtis Cawley also openly talked about his blatant racist attitude at work at the Tesco in Kensington.

“Shop’s getting a refurb and there’s 20 workmen on site so as you’d imagine the toilets’ a no-go as it’s always in use.

“Never mind the 17-foot banner sayen were closed, the P****s, and gooks walkin’ in sayen ‘we no understand.’

He proudly added: “The P**** gym around the corner already call me ‘the Nazi from Tesco’, ha ha ha.

“I work in a minority area so you’ll have to excuse my being a tad dubious.”

Chris Fieldhouse, managing director of Advance Security, told the ECHO: “This employee has been dismissed for gross misconduct and bringing the company into disrepute.

“He was placed on suspension while our investigation takes place, led by his general manager for the region.

“If any allegations emerge of an individual working outside of their assignment instructions or contravening them, it leads to a disciplinary process.

“Suspension was immediate when these claims came to light, as anything which potentially brings the company into disrepute is treated with the utmost seriousness.”