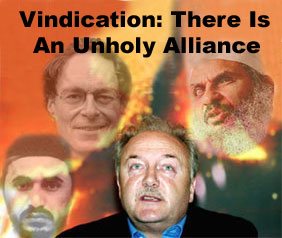 “British Laborite and progressive George Galloway calls for a formal uniting of the left in the West with the Islamic jihadists in the war on terror. Lawyers led by anti-American, pro-Communist, jihad sympathizer Michael Ratner descend on Guantánamo.”

David Horowitz claims vindication for the thesis presented in his book Unholy Alliance: Radical Islam and the American Left that “the progressive left in the West was in a de facto alliance with the Islamic jihadists”.