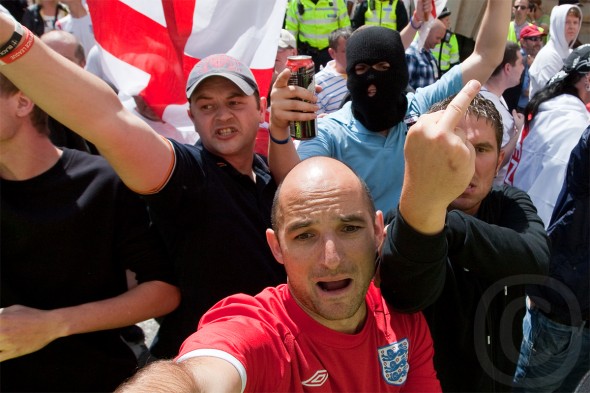 An English Defence League supporter who clashed with Asian men after a protest march cannot carry out his community work as part of a multi-ethnic group, a court heard.

Nathan Hopkins appeared before magistrates in Huntingdon when he was accused of being part of a group of English Defence League (EDL) members who got embroiled in a fight outside the Queen Anne Terrace car park, Cambridge, after a march through the city last Saturday. One of the Asians was punched in the head repeatedly during the fracas by Hopkins, prosecutor Laura Mardell told the court.

The 18-year-old, of Lombardy Drive, Peterborough, admitted using threatening behaviour and was given a 12-month community order, with 40 hours of unpaid work. He was also ordered to pay £85 prosecution costs.

Magistrates requested a report on whether Hopkins would be suitable for community work and the court probation officer said that although he was suitable, the nature of the offence meant he could not take part in the multi-cultural work teams and would have to go on an individual placement.

Ms Mardell said Hopkins told police he had gone to Cambridge with a group of 20 other EDL supporters and he had been a member of the EDL since December 2010, “joining after believing too many extremists were coming into the country”.

Two other EDL supporters also appeared before magistrates charged with public order offences. Simon Pearson, 28, of Whitehill Road, Abbey, Cambridge, denied using threatening words and behaviour in the area of Christ’s Pieces and his case was adjourned to August 31.

Shaun Hughes, 48, of Wethersfield Road, Colchester, was accused of using threatening behaviour and assaulting a police officer in the execution of his duty. Hughes was released on bail until August 18 with conditions that he does not attend any EDL rallies or enter Cambridgeshire apart from for court appearances.

Ms Mardell said Hopkins’ case arose when a group of around 10 EDL supporters clashed with a group of Asian men in the Parkside area. A fight started and police saw Hopkins punching an Asian man in the head three or four times.