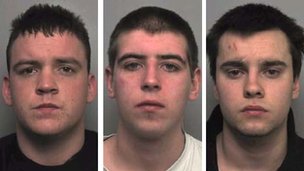 Three men have been sentenced for an arson attack on a newly-renovated mosque in West Sussex.

James Everley, 20, of Crawley, James Smith, 20, of Burgess Hill, and Joshua Morris, 20, of Haywards Heath, were all sentenced to three years at a young offenders institute.

The fire at the mosque in Wivelsfield Road, Haywards Heath, was started at about 02:10 GMT on 13 February. Police believe the attack was a religiously-aggravated hate crime.

The men had pleaded guilty at Hove Crown Court to arson, theft of paraffin and a public order offence, which involved racially or religiously aggravated fear of violence.

Ch Insp Jon Hull, district commander for Mid Sussex, said: “The mosque was occupied at the time this fire was started and it could have had devastating consequences if it hadn’t been put out quickly. Thankfully only damage was caused to the building. Everyone who lives, works or visits Sussex has a right to go about their lives without becoming the victim of a hate crime because of their disability, race, religious beliefs, sexual orientation or gender identity.”

The mosque had been renovated and had reopened three months before the attack.