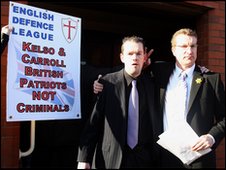 English Defence League (EDL) members who kicked over Korans and traded punches with Muslims in Speakers’ Corner have been sentenced to a fortnight’s curfew.

Three men admitted public order offences at Woolwich Crown Court on Wednesday, August 3. Full-time carer Christopher Long, who lived in Kent Way, Surbiton, at the time of his arrest, held his head in his hands as prosecutor Eleanor Mawrey described the fight on October 24 last year.

Long, Brian Bristow and Bryan Kelso had attended a rally outside the Israeli embassy in Kensington, which ended in a confrontation between EDL members and anti-fascist campaigners in Hyde Park.

By 5pm about 200 people were gathered and the atmosphere turned tense before the trio became violent, the court heard. Ms Mawrey said: “Officers arrested them for what they had done but also for their own safety.” Police saw Long kick over a table with Islamic literature and Korans before fighting with an Asian man.

Long, who now lives in Palace Road, Streatham, breathed a sigh of relief as his sentence of 14 days curfew and a penalty of £425 was passed by Judge Stephen Dawson. Kelso, 28, from Paddington, who overturned the table and grabbed a police officer’s genitals when he was arrested, was given the same sentence.

But former soldier Brian Bristow, 38, who told the court he was homeless, was fined £825 as he had nowhere to be curfewed. The court heard he had racially abused one of the men and said he was only being arrested because he was white.

Judge Dawson said he did not hold the men’s membership of the EDL either for or against them but said their behaviour in Speakers’ Corner, a symbol of free speech to the world, had been threatening and unpleasant. Some of the men had been drinking before going there, he said, which was “never a good thing when you’re going to demonstrations”. He said: “Speech can’t be free if people become violent and break up tables and trade punches at each other.”

An attempt to impose an antisocial behaviour order on Bristow, banning him from attending EDL or Infidels demonstrations or distributing their literature, was delayed to a hearing on October 6. Judge Dawson said: “This is roaming into the area of one’s right to protest. That is the problem, isn’t it?”

Kelso, you may recall, was convicted in Luton last year on a charge of using “threatening, abusive or insulting words or behaviour”, along with EDL co-leader Kevin Carroll.

Meanwhile, over at the EDL’s Facebook page, its supporters have been engaging in a typically thoughtful and informed debate, on the subject of racism and patriotism.

Update:  And the Casuals United blog has reproduced the news report of the three EDL thugs’ convictions under the headline “The day the EDL reclaimed Speakers Corner from the preachers of Jihad”.

Casuals United have previously claimed responsibility for an assault on a meeting in Lincoln where local Muslims were discussing plans for a new mosque. And they applauded an arson attack on a proposed Islamic centre in North Wales, which they attributed to the EDL’s anti-mosque campaign.

Yet the EDL leadership was quite happy to work with Casuals United in organising protests in Blackpool, in which the Charlene Downes case was used as a pretext for inciting hatred against the local Muslim community.

Stephen Lennon and the EDL leaders have recently been trying desperately to dissociate themselves from those sections of the EDL who are too explicit in their support for violent extremism. How long before the EDL distances itself from Jeff Marsh’s gang of hooligans?