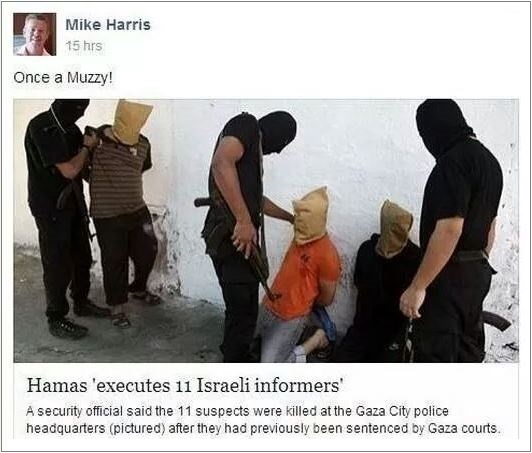 Complaints have been made after a Torfaen councillor used the term “muzzy” in a post on Facebook – but he denies the comment was an anti-Muslim slur.

Torfaen independent councillor Mike Harris, the chairman of safer communities overview and scrutiny, posted “Once a Muzzy!” on Facebook alongside a Daily Mail article on Hamas reportedly executing 11 Israeli informers. This was quickly picked up by Hope Not Hate campaigners who posted it on their blog and Facebook page.

One person responded that Cllr Harris should step down, while another says that they made a complaint to Torfaen Council. But Cllr Harris has defended his post saying “it is not racist”.

He denies that it was intended as a racist slur but that he was using the word in its proper meaning as set out in the dictionary, “Unable to think clearly; confused”.

While referring to the picture accompanying the article, which shows the executioners carrying guns, he said: “They are executing people so they must be confused and not able to think clearly or muzzy as it says in the dictionary.”

A council spokesman confirmed that the council has been contacted by members of the public regarding the post and have referred the public to the Public Service Ombudsman.

He explained that individual councillors are responsible for their postings on social media and are subject to a Code of Conduct, some aspects of which apply to a councillor even when he/she is not acting on council business.

He added: “Complaints that a councillor may have breached the Code should be made to the Ombudsman and the Ombudsman will decide whether or not to investigate.” The Ombudsman confirmed that it has not received a complaint on the issue.

In 2012, The public services ombudsman’s office received complaints after comments made by Cllr Mike Harris provoked protest. But it concluded it would not investigate the councillor, as there was no evidence of a breach of the code of conduct.

This was after Cllr Harris wrote on Facebook that he would rush an act through Parliament to “reclassify all immigrants as being illegal immigrants.”

Previously Mr Harris had also written, in relation to Cardiff’s Mardi Gras festival: “I am thinking of being radical and staging a march for heterosexual rights. Anyone care to join me?”

Cllr Harris denied that he is racist or homophobic.