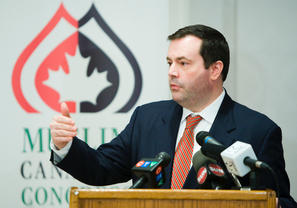 British news reports have quoted Conservative officials saying the party’s bid to achieve a parliamentary majority will only succeed if, like Canada’s Stephen Harper, Prime Minister David Cameron can broaden the Tories’ appeal among immigrants from India, Pakistan and elsewhere.

At the centre of the Conservatives’ wooing of Canadian ethnic minorities has been Mr. Kenney, Minister of Citizenship, Immigration and Multiculturalism. The Calgary MP is renowned for attending countless ethnic festivals across the country, waving the Conservative flag and cementing new bonds between the party and various immigrant communities.

Both the Independent and Daily Mail newspapers are reporting that Cameron intends to send his political secretary, Stephen Gilbert, to meet with Mr. Kenney in Canada and learn more about how British Conservatives can increase their support among so-called BME voters (Black and Minority Ethnic), as they’re categorized in U.K. political parlance.

“If we want to win a majority at a general election, we need the support of everyone who shares our values – whatever their background,” said Baroness Sayeeda Warsi, co-chairman of Britain’s Conservative Party and a minister without portfolio in Mr. Cameron’s cabinet.

“But at the moment, there is often a big mismatch between the ideals and aspirations of ethnic minority voters and the party they vote for. We need to learn from centre-right parties in other countries how to attract [voters] who share our values but haven’t traditionally voted Conservative,” she told the newspapers.

It is difficult to see how lessons from Jason Kenney will help the Tories to build support within the British Muslim community. For some examples of Kenney’s attitude towards Canadian Muslims and their representative organisations see here and here. Kenney’s idea of engaging with the Muslim community is to attend a conference of the woefully misnamed Muslim Canadian Congress, which represents nobody and whose politics are exemplified by its decision to join the hysterical Islamophobic campaign against the so-called Ground Zero mosque in New York.