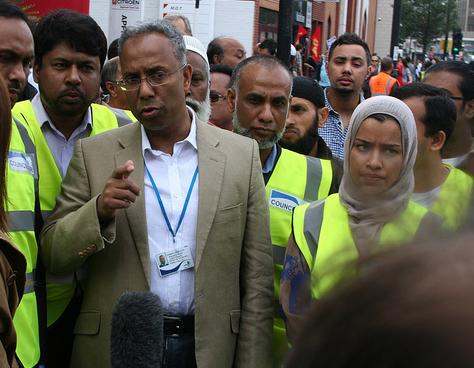 The accusation that Independent mayor Mr Rahman targeted areas represented by his supporters followed the release of figures highlighting discrepancies in where renovations under the Decent Homes Programme have been completed since elections in 2010. The information was circulated by EDL supporters on social networking site Twitter.

A spokesman from the mayor’s office described Labour’s accusations as “inflammatory”, while cabinet member for housing Cllr Rabina Khan added: “The irresponsible and dangerous claims made by Labour have found their audience and are now doing the rounds with the EDL to stoke up fear within the community that some residents and areas are more deserving than others.”

In Whitechapel – represented by three Independent councillors – 724 homes benefitted from work between 2010 and January this year. But in Labour’s Bow West ward, only seven homes had work done during the period. A council spokesman said all of the 12,000 council homes across the borough would receive works by 2015/16.

The row comes after Labour chose London Assembly Member John Biggs to take on the incumbent mayor in local elections next year. And Cllr Khan added: “In a crucial election year, residents expect responsible leadership from John Biggs and Labour, and that they wouldn’t resort to the ‘dog whistle’ politics of the far right.”

Pictured: Mayor Lutfur Rahman at the Tower Hamlets demonstration against the EDL in September 2011