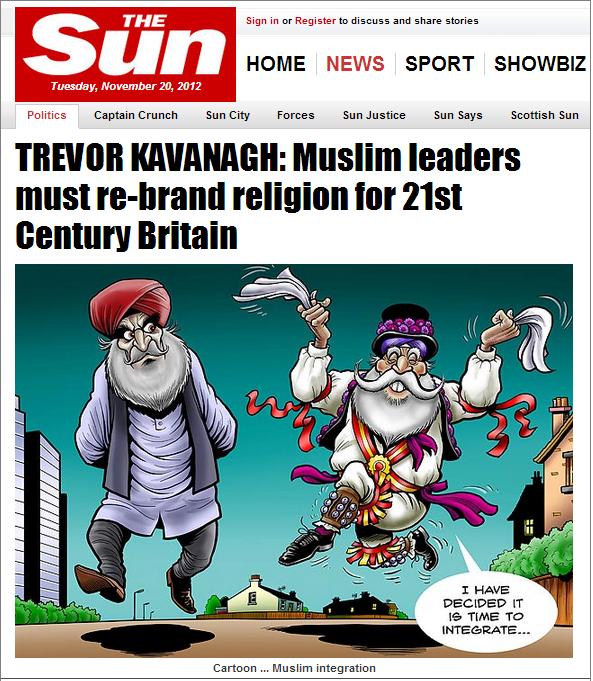 Trevor Kavanagh had a comment piece in yesterday’s Sun, titled “Muslim leaders must re-brand religion for 21st Century Britain”, in which he responded to two recent press reports concerning the British Muslim community.

One was the controversy over Clarissa Dickson Wright‘s comment that an accidental visit to an area of Leicester where “all the men were wearing Islamic clothing and all the women were wearing burkas” was “one of the most frightening experiences of my life”. She went on to blame the 7/7 bombings on the “ghettoisation of Muslim areas”.

The other was the report that David Cameron’s recently appointed Australian election organiser Lynton Crosby told Boris Johnson that he was wasting his time trying to win votes from “f***ing Muslims”.

Kavanagh finds little that is objectionable here. He notes that Clarissa Dickson Wright is “refreshingly forthright”, while “Aussies are renowned for colourful language”. According to Kavanagh, the adverse reaction to these bigoted outbursts is to be explained by the regrettable fact that “criticism of any race or creed, except English Christians, is more or less outlawed”.

Kavanagh writes that “many otherwise tolerant people feel as Clarissa Dickson Wright did on entering inner cities across Britain only to find themselves in what seems a foreign land”. He claims that “the Muslim enclaves described by Clarissa … harbour thousands who would and could do this country harm”.

Kavanagh asserts that “the good name of Islam is far from enhanced by almost daily authentic reports of honour killings, forced marriages and Pakistani child sex gangs”, and concludes with the following warning to the British Muslim community: “unless they and their leaders stand up and loudly and repeatedly denounce such conduct, their community will always be surrounded by fear and suspicion.”

To cap it all, the article is illustrated with an offensive cartoon, captioned “Muslim integration”, which features caricatures of two men wearing Sikh turbans. It tells you a lot about the Sun‘s mindset that the paper is evidently incapable of distinguishing one non-white faith community from another.