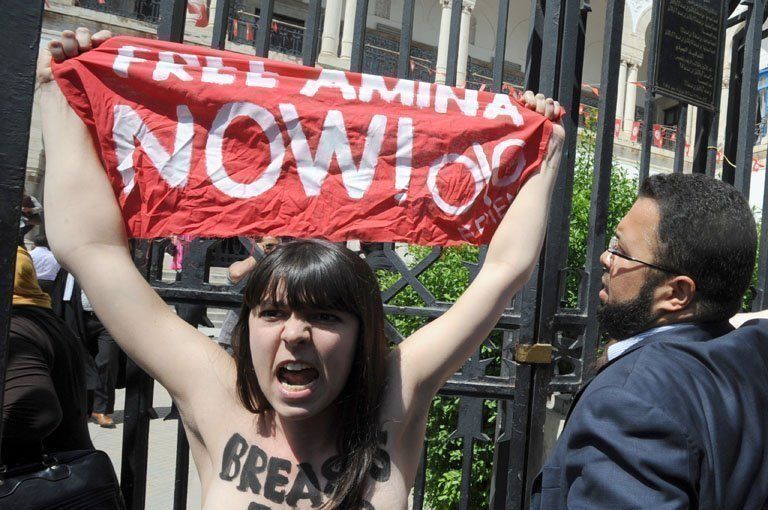 Amina Sboui, a Tunisian activist who was detained for nearly three months, said on Tuesday she had left the radical women’s protest group Femen, accusing it of Islamophobia.

“I do not want my name to be associated with an Islamophobic organisation,” she told the Maghreb edition of the Huffington Post. “I did not appreciate the action taken by the girls shouting ‘Amina Akbar, Femen Akbar’ in front of the Tunisian embassy in Paris,” Sboui said.

Those chants were a parody of Allahu akbar (God is greatest), a phrase frequently used by Muslims to express their allegiance to and praise of God.

Amina also criticised the burning of the black Tawhid flag, which affirms the oneness of God, in front of a mosque in Paris. “That offends many Muslims and many friends of mine. We must respect everyone’s religion,” she added.

The Femen protests took place as Sboui was being held in pre-trial detention for painting the word “Femen” on a cemetery wall in protest at a planned meeting of radical Muslim Salafists in May in the central city of Kairouan.

She was finally released at the beginning of August pending her trial for desecrating a cemetery.

The young woman also criticised the lack of financial transparency of Femen, the movement founded in Ukraine and now based in Paris, which has become famous for its topless protests against dictatorship in support of women’s rights.

“I don’t know how the movement is financed. I asked (Femen leader Inna Shevchenko) several times, but I didn’t get a clear answer. I don’t want to be in a movement supported by suspect money. What if it is financed by Israel? I want to know.”

Amina, who now calls herself an “anarchist”, sparked both scandal and a wave of online support earlier this year after she was threatened by Tunisia’s increasingly assertive hardline Islamists for posting topless pictures of herself on Facebook.

At the end of May, three Femen activists – two French and a German – were arrested, and eventually freed, for bearing their breasts outside the main Tunis courthouse, in a demonstration of support for Amina. Just last week, Sboui published a new topless picture of herself on the Internet lighting a petrol bomb with a cigarette.

See also “Amina Sboui Quits FEMEN: ‘I Do Not Want My Name To Be Associated With An Islamophobic Organization'”, Huffington Post, 20 August 2013

FEMEN’s response (“FEMEN brakes up with Tunisian activist”) can be consulted here.