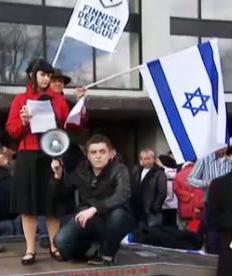 The programme links several Finns Party members to the Finnish Defence League (FDL), a Finnish chapter of a far-right street movement in the UK which claims to protest against “militant Islam.”

Reporters found that several local Finns Party politicians have been active on the FDL’s website. Spotlight’s investigative journalists discovered that the Finns Party has expelled one of its members active in the FDL to prevent negative publicity.

Tampere University researcher Jussi Jalonen says that Islamophobia is also rife among Finns Party members involved with the nationalistic Suomen Sisu association, which calls for “separate but equal” treatment of cultures and races “blurred by multiculturalism.”

Last week, the Finns Party appointed the chair and founder of the immigration-critical chat room Hommaforum to head its paper and online site. This new editor-in-chief has also been associated with Suomen Sisu.

Finns Party MP Olli Immonen meanwhile says he does not see a problem with criticising Islam, stating that “Islamisation is one of the most significant challenges facing western culture.”