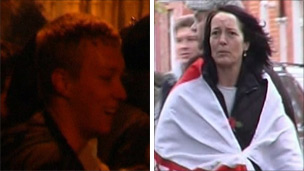 CCTV images have been released of two people sought by police over disorder outside a Portsmouth mosque.

A protest was held at the Jami Mosque on 13 November in response to the burning of poppies by Muslims Against Crusades in London on Armistice Day.

Hampshire Constabulary released pictures of a man and woman they wish to speak to in connection with allegations of bottles being thrown.

One man has already been charged with affray and assaulting a police officer.