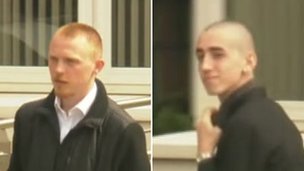 A young fascist with a fascination for Norwegian mass murderer Anders Breivik has admitted plotting to damage mosques. John Roddy and his friend Tobias Ruth daubed racist graffiti on an Islamic Centre in Torbay and sent threatening messages. They were both warned they faced jail after Roddy admitted having a terror manual on his computer.

The pair were arrested in January after an area of Torquay was sealed off by armed police who feared they may be dealing with a terrorist cell. Roddy’s laptop contained an “al-Qaeda training manual” and Breivik’s “2083 A European Declaration of Independence”. Breivik was the inspiration of the plotters, who daubed the letters KT 2083, standing for Knights Templar, and referring to the mass killer’s manifesto.

Roddy, 20, of Lymington Road, Torquay, and Ruth, 19, of Morgan Avenue, Torquay, pleaded guilty to conspiracy to cause criminal damage and to send articles containing threats which were intended to cause distress. Roddy also admitted an offence under the Terrorism Act of possessing information likely to be useful to a terrorist.

Judge Francis Gilbert, QC, bailed the men at Exeter Crown Court but warned them they faced jail when they return for sentence next month. He said: “These are serious offences for which they must expect immediate custody. I warn them that all options including custody are open.”