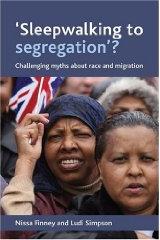 The head of Britain’s equalities watchdog has come under fire for undermining race relations with “bogus and alarmist” claims that Britain is an increasingly segregated society.

The charge against Trevor Phillips, chairman of the equality and human rights commission, is made in a new book that also condemns him for propagating myths that Britain is blighted by race ghettos and threatened by extremism fostered in isolated Muslim communities.

The book, Sleepwalking to Segregation?, by two Manchester University academics, says there is no statistical evidence of “white flight” from inner-city areas with high numbers of minority ethnic residents. Official statistics reviewed by the authors show white people are, in fact, moving into certain inner-city areas with large ethnic minority populations, such as Leicester, Bradford, Lambeth, Wolverhampton, Wycombe, Manchester and Merton.

The book warns that repeated falsehoods about immigration, integration and segregation are promoting racial division.

The authors also rejected claims that segregation bred terrorism, as there was no evidence that Muslims from areas with large Muslim populations were more likely to be charged with terrorism than those from others areas.

A spokeswoman for the equality and human rights commission declined to comment.

Cf. the article “Ghetto Britain” in the Daily Star, which is based on material produced by the Equality and Human Rights Commission.