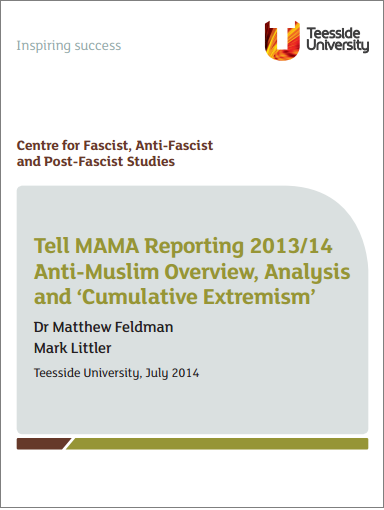 The number of reported instances of anti-Muslim hate crime in the UK has risen sharply since the murder of a British soldier in London last year, with women wearing traditional Islamic dress most likely to be the victims of abuse and street attacks, according to a new study.

But researchers believe that a widespread lack of trust in the police in Muslim communities and endemic under-reporting of hate crime masks the true scale of the problem, with most Islamophobic incidents, ranging from online trolling to verbal abuse and extreme violence, going unlogged and unpunished.

The publication of the report also comes amid concerns expressed by some Muslims about their safety on British streets following the murder of a female Saudi Arabian student in Colchester last month. Police say the attack may have been religiously motivated because the victim was wearing an abaya.

The study, conducted by researchers at Teesside University, is based on analysis of 734 incidents reported to and verified by case workers at Tell MAMA, an organisation monitoring anti-Muslim attacks, over 10 months from May 2013 to the end of February.

They included 23 cases of assault, 13 cases involving extreme violence, 56 attacks on mosques and hundreds of instances of online abuse, with an average of more than two confirmed cases a day.

Matthew Feldman, the co-author of the report, told Al Jazeera that while official figures showed a decline in hate crime generally, anti-Muslim abuse appeared to be bucking that trend.

The majority of abusers were men under the age of 30, although children as young as 10 were among those identified as perpetrators. And while on-the-street hate crime was typically targeted at men, Feldman said 54 percent of cases recorded by Tell MAMA had been reported by women, including many who felt they had been abused because they were wearing headscarves, face veils or other clothing which visibly identified them as Muslim.

“This figure might indicate a greater willingness [among women] to report anti-Muslim attacks. Or, on the other hand, Muslim women could be seen as more visible targets because of the traditional clothing they wear such as the hijab or abaya,” he said.

The study also highlighted a 400 percent increase in incidents a week after two Muslim converts murdered British soldier Lee Rigby in May 2013.

The attack was strenuously condemned by Muslim organisations but a spike in attacks followed, with one man subsequently convicted of murdering an 82-year-old man, Mohammed Saleem, as he walked home from a mosque in Birmingham, and plotting to bomb three other mosques.

The secretary of one mosque in Essex, attacked at the time by a man armed with a smoke grenade and knives, told Al Jazeera that Muslims were afraid they would become “sitting targets”.

“At this time, many people in Britain felt frightened and victimised,” the report concludes.