A politician with the centre-right UMP party near Nice found others didn’t get the joke when he sent a ‘humorous’ email mocking the North African accent.

Gilbert Garelli, a local councillor in La Colle-sur-Loup in the Provence-Alpes-Côte d’Azur region, sent the email to a group of 20 friends. The offending missive was sent on August 1st, the first day of Ramadan, and mis-spelled certain words to mimic the accent.

It ended with the line “I wish you a good Ramadan”, with “I wish” written as “ji souhaite” rather than the correct “je souhaite.” He attached a copy of his Socialist party opponents’ programme to the email, in Arabic, adding “remember to read it from right to left!”

A large number of the recipients reacted with horror. A fellow party member, Corinne Guidon, told local newspaper Nice Matin it was not “her kind of humour.”

“It was just a joke,” Garelli initially told the newspaper but, as the scandal grew, he apologized publicly for his poor taste and sent a conciliatory email to the original recipients.

The mayor of Nice, Christian Estrosi, didn’t see the funny side and has instructed his team to take action. “This is no laughing matter,” Pascal Condomiti, an advisor to the mayor, told Le Figaronewspaper. “We will be meeting about this and will probably suspend him from the party.” 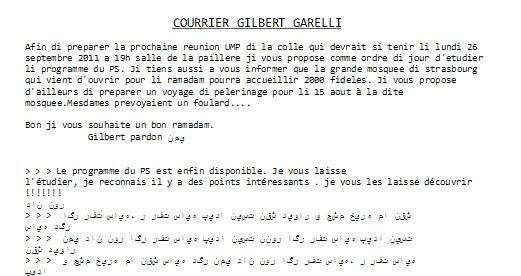