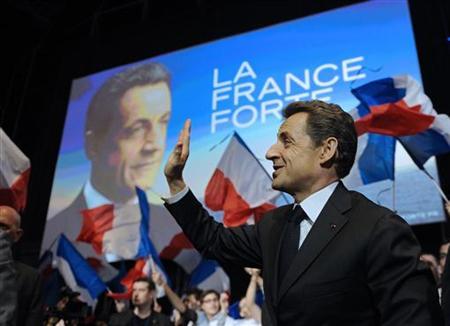 Unease is growing in French President Nicolas Sarkozy’s centre-right UMP party a week before a presidential election over his lurch to the right in pursuit of supporters of anti-immigration candidate Marine Le Pen.

Some mainstream conservatives have voiced public dismay at his embrace of the campaign themes, language and even some proposals of Le Pen’s National Front. In private conversations, doubts are widespread about the morality and effectiveness of the strategy.

In the last week, Sarkozy has repeatedly declared that there are too many foreigners in France and vowed to reduce legal immigration. Echoing a Le Pen proposal, he has called for police to be given greater license to shoot fleeing crime suspects. He has accused his Socialist rival Francois Hollande of being backed by Islamists and said Le Pen’s voters are respectable and her party compatible with the French Republic.

“Even though I will vote for Nicolas Sarkozy on the second round, it’s clearly my duty to ring the alarm bell about this strategy,” Etienne Pinte, a UMP lawmaker, told Reuters.

He said former prime ministers Jean-Pierre Raffarin and Alain Juppe, Sarkozy’s foreign minister, had made clear in internal meetings their reticence about the rightward drift. “All through the campaign, we felt there were misgivings among a number of parliamentary colleagues and the two former prime ministers about the exploitation of these extreme-right themes,” Pinte said.

Sarkozy hardened his discourse as soon as the results of last Sunday’s first round showed Le Pen, with nearly 18 percent, had won twice as many votes as centrist Francois Bayrou. The president needs to draw support from both sides to beat Hollande, the clear frontrunner in opinion polls, in the May 6 second-round runoff.

Raffarin hinted at his distaste in an interview with the newspaperLe Monde last week, saying: “If I were to express reservations today, it would weaken my own side … but I remain attached to the humanitarian values of our program.” Asked whether the strategy drawn up by Sarkozy’s political guru Patrick Buisson, a former extreme-right newspaper editor, had not strengthened the far right, Raffarin said the time for analysis would come after May 6. “We are in a battle now, and in a battle, the honorable thing is to be loyal,” he said.

Another former Gaullist prime minister, Dominique de Villepin, deplored what he called “crossing one republican red line after another (in a) shameless seduction of extremist votes”. Without mentioning Sarkozy by name, Villepin warned the mainstream right in an article in Le Monde against betraying its own values.

“One would think there were only National Front voters in France,” he wrote. “As if there were not more important issues than halal meat, legal immigration and (single-sex or mixed) bathing hours in public swimming pools.” Sarkozy has played up each of those issues in his quest to win over Le Pen voters.