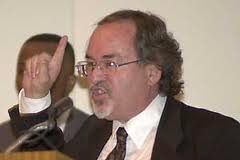 The announcement earlier this month by College Republicans at the University of California Santa Barbara (UCSB) that they would be hosting as talk this evening by David Horowitz of FrontPage Magazine and Islamo-Fascism Awareness Week notoriety provoked the no doubt intended furore.

College Republicans applied for a grant of $1,770 from Associated Students Finance Board to subsidise the costs of the event. However, the AS rejected the application following objections from the newly-formed UCSB Respect Coalition, which brought together over 60 student groups including the Muslim Student Association, Students for Justice in Palestine, American Students for Israel and Queer Student Union (although the university’s Legislative Council did allocate $800 for the event’s security costs).

Predictably, Horowitz denounced the decision as an outrageous attack on free speech, although all that had really happened was that College Republicans had been denied the use of their fellow students’ money to finance Horowitz’s hatemongering.

David Horowitz has claimed that opposition to A.S. funding for his upcoming speech is rooted in a desire to silence him and curtail his right to free speech. The truth is that we merely oppose the use of student funds to subsidize bigotry and prejudice. Students must be exposed to a wide variety of intellectual perspectives on all issues, but Horowitz goes far beyond providing an alternative perspective.

We and many other students on this campus are deeply offended by his claim that “there is a movement for a second Holocaust of the Jews that is being supported [at UCSB] by the Muslim Student Association.” The UCSB MSA is an incredibly valuable member of our campus, has been involved in numerous interfaith dialogues and provides a cultural and religious home to a large segment of the UCSB Muslim community. The accusation that the UCSB MSA has ties to terrorism is not only baseless and inaccurate, but it also propagates stereotypes and misconceptions that far too often have led to deadly consequences.

We stand unified with our Muslim friends in repudiating these grossly inaccurate stereotypes and call upon the UCSB community at large to stand by their fellow students.

Rather than stage a protest against the Horowitz meeting, now billed as “Infantile Disorders at UC Santa Barbara: Why the Muslim Student Association is Afraid of David Horowitz”, the UCSB Respect Coalition have organised an alternative event under the title “The Alternative: Empowering Our Voices”.