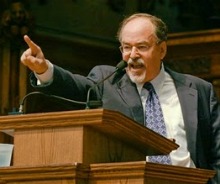 About 20 minutes after David Horowitz began speaking Monday, nearly all the students in attendance walked out of Hamilton Hall in protest. The action came in response to what participants said were slanderous remarks about Muslims and members of Arab nations.

Committee for a Better Carolina, along with Christians United for Israel, sponsored Horowitz to speak at UNC in a lecture titled “Why Israel is the Victim in the Middle East.”

Horowitz is a pro-Israel activist who has been the subject of controversy in the past for buying anti-Palestine ads in college newspapers. In Monday’s lecture, Horowitz argued that Palestine is trying to destroy Israel and that Israel fights back only in self-defense.

Horowitz criticized groups like the Muslim Students Association, linking them to various terrorist groups. He also compared Muslims to Nazis. “There are good Muslims and there are bad Muslims,” he said. “But there were good Germans too, and in the end they didn’t make a damn difference.”