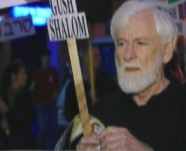 “The story about ‘spreading the faith by the sword’ is an evil legend, one of the myths that grew up in Europe during the great wars against the Muslims – the reconquista of Spain by the Christians, the Crusades and the repulsion of the Turks, who almost conquered Vienna. I suspect that the German Pope, too, honestly believes in these fables. That means that the leader of the Catholic world, who is a Christian theologian in his own right, did not make the effort to study the history of other religions.

“Why did he utter these words in public? And why now? There is no escape from viewing them against the background of the new Crusade of Bush and his evangelist supporters, with his slogans of ‘Islamofascism’ and the ‘Global War on Terrorism’ – when ‘terrorism’ has become a synonym for Muslims. For Bush’s handlers, this is a cynical attempt to justify the domination of the world’s oil resources. Not for the first time in history, a religious robe is spread to cover the nakedness of economic interests; not for the first time, a robbers’ expedition becomes a Crusade. The speech of the Pope blends into this effort. Who can foretell the dire consequences?”