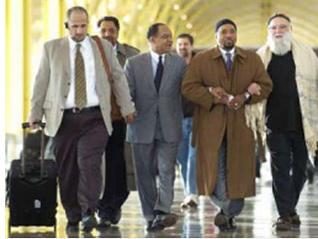 US Airways has agreed to pay “undisclosed damages” to six imams it kicked off a flight in 2006 because of alleged suspicious activity, a prominent rights group said Tuesday.

The men were removed from a Minneapolis to Phoenix flight on November 20 and questioned for five hours, sparking a protracted legal battle between the six and the airline, airport authority, US Airways, the crew and several passengers.

Four of the religious leaders prayed in the airport before boarding the flight, apparently prompting suspicions on the part of staff and passengers. In a statement, the imams said they were guilty only of performing “normal evening prayers.” After questioning US Airways refused to allow them to take another flight home.

The Council on American-Islamic Relations (CAIR) hailed the settlement as “victory for justice and civil rights.”