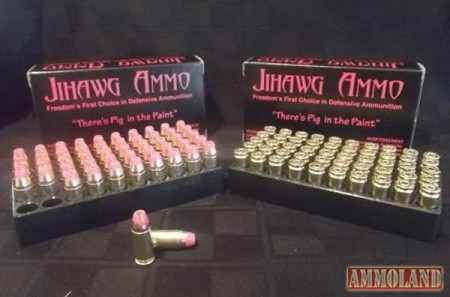 The right-wing US website BizPac Review reports on a new and particularly distasteful example of Islamophobia.

An Idaho company named Jihawg Ammo (company slogan “Peace through pork”) has begun producing bullets coated with “pork-infused paint”. It advertises this as “the only ammunition in the world that provides a peaceful and natural deterrent to radical Islam”.

BizPac Review explains: “The inclusion of pork in the paint makes the bullets haraam, or unclean. Under Islamic law, anyone who comes in contact with a haraam item is then unclean, and must engage in a cleansing ritual. No unclean person can be admitted into Paradise.”

Over at The American Muslim, Sheila Musaji describes this nonsense as a “classic Islamophobic fail“. She points out that Jihawg Ammo and its supporters don’t have a clue about the prohibition of pork in Islam: “These idiots’ understanding of Sharia and Fiqh is so limited and wrong that they just don’t get the fact that there are no Islamic teachings that say what they claim.”

Sheila Musaji also notes that, while Jihawg Ammo covers itself by referring to “radical Islam”, their product is promoted on the Guns.com website as “pork-painted bullets to shoot Muslims”.