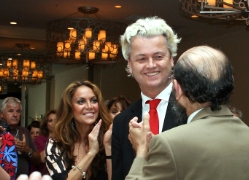 Anti-Muslim activist Pam Geller has been turned away from the upcoming Conservative Political Action Conference, despite speaking at the event for the past four years, she says. “This year, I applied to speak and was ignored,” she wrote on her blog. “So, for the first time in five years, I won’t be at CPAC.”

CPAC is the largest annual gathering of conservatives in the country, and one of the few places where conservative politicians, movement leaders, media personalities and big donors all come together under one roof.