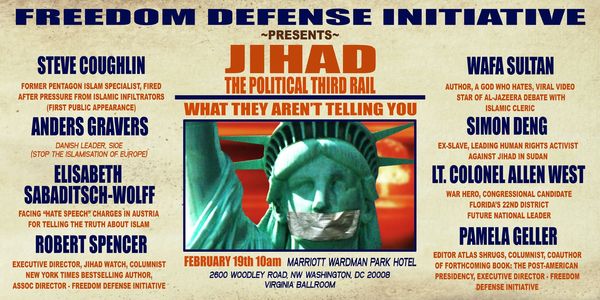 The speakers participating in “Jihad: America’s Third Rail,” an “unofficial” panel at today’s Conservative Political Action Conference (CPAC) wanted their standing-room only audience to know that there’s more to fear than jihad – it’s Islam itself that is the threat.

Sentiments like that are what has made this panel – which just ended here at the Marriott Wardman Hotel in D.C – one of the more controversial at the three-day conservative confab.

“Everyone knows Islam is a religion of peace that has been hijacked by a tiny minority,” said Robert Spencer, sarcastically and to a great amount of applause and guffaws. Spencer, executive director of Jihad Watch and associate director of the Freedom Defense Initiative, which he recently founded with Atlas Shrugged blogger Pamela Geller, told his audience everyone believes that “like they believe in Santa Claus though no one has ever seen it.”

He declared that “conservative media leaders even parrot this line” that Islam is a peaceful religion at its core.

So defined the event, which repeated the group’s message, that political correctness was preventing the American people – elected officials and the government included – from acknowledging – in Geller’s words – that Islamists “have infiltrated at every level of society and all levels of government.”