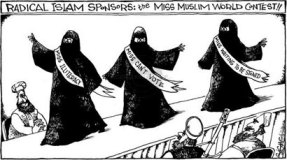 “The Muslim world is a strange and formidable place to an average American, in some ways a perennial zone of magic, mystery and disorder,” said Dr Ghazi Falah, of the University of Akron, Ohio, on Monday at the American University of Beirut. It is regarded in “a framework of violence, disorder and unreason contrasted with the rationalism of the West.”

Falah was one of three presenters for “Media and Film Representations of Arabs and the Middle East,” one session held as part of a three-day “America in the Middle East-The Middle East in America” conference.

On November 27, 2002, the Los Angeles Times printed a cartoon depicting three fully veiled women walking across a stage under the banner “Radical Islam sponsors the Miss Muslim World contest.” The sashes the women wore read “Miss waiting to be stoned,” “Miss can’t vote” and “Miss illiteracy,” while two Afghani-looking men watched, one of which had a rifle.

“Perhaps some would argue this cartoon contains a kernel of truth, and targets only radical Islam and not all Muslims, but how could such an insulting and crude cartoon be considered newsworthy enough to be published in the Los Angeles Times?” Dr Falah asked. He noted the cartoon was placed on the same page with an editorial about the Bush administration’s preparations for war in Iraq, creating a juxtaposition of “the bad Islam” with the “good Bush administration” coming to the rescue.

Robert Spencer is not best pleased. He himself, he whinges, has been accused of “spreading hate” and “defaming Islam”. (Now, where could anyone have got that idea from?) He continues: “The press is, as any regular Jihad Watch reader knows, extraordinarily reluctant to say anything about the Islamic component of jihad violence.” You can only conclude that Jihad Watch readers must inhabit some alternate reality.