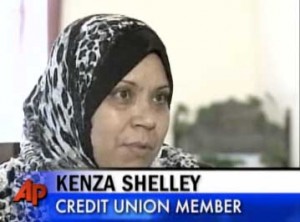 A Muslim woman was asked to leave her place in line at a credit union in Southern Maryland and be served in a back room because the head scarf she wore for religious reasons violated the institution’s “no hats, hoods or sunglasses” policy, the woman said yesterday.

The incident at the Navy Federal Credit Union on Saturday was the second in a month for Kenza Shelley, and Muslim advocates fear it could become a problem nationwide as many financial institutions, intent on curbing robberies and identity theft, ban hats and similar items without appropriate accommodations for religious attire.

“This may be the tip of the iceberg,” said Ibrahim Hooper, a spokesman for the Washington-based Council on American-Islamic Relations. “There’s got to be a way to work it out so that this security concern does not lead to violations of constitutional rights.”