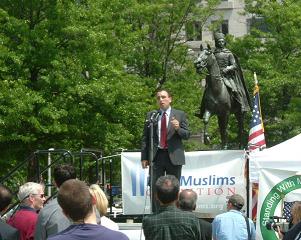 “In the first of its kind for an event organized by a major national Muslim organization, Kamal Nawash and the Free Muslims Coalition (FMC) recently held the Free Muslims March Against Terrorism. Not surprisingly, the leaders of every other major Muslim organization shunned the march and declined to take a public stand against terrorism and extremism.” So Joel Mowbray claims.

According to one report of the 14 May demonstration, only 50 people turned up – see here. So if all the US Muslims who declined to participate in Kamal Nawash’s self-advertising stunt did so because they declined to take a stand against terrorism and extremism, then you can only conclude that virtually every Muslim in the US is a terrorist sympathiser. Which is basically Front Page Magazine’s line.

For some of the reasons why mainstream Muslim organisations didn’t support the “Free Muslims March Against Terrorism” see here and here.