Any sympathy Quilliam’s new senior researcher Usama Hasan may have won within the wider Muslim community last year, as a result of the threats to which he was subjected over his views on evolution, has no doubt evaporated following his disgraceful campaign against Leyton’s Masjid-al-Tawhid.

Still, I suppose it’s a case of swings and roundabouts. You squander the goodwill of some, only to earn the approbation of others. Judging by an exchange of tweets last Friday that followed the publication in the Evening Standard of a hysterical article claiming that the mosque where he formerly served as imam poses a terrorist threat to the Olympics, it appears that Dr Hasan has now formed a mutual admiration society with none other than Hasan Afzal.

The leader (and only known member) of an outfit rejoicing in the name of British Muslims for Israel, Afzal was recently seen in Hendon at a right-wing Zionist counter-demonstration called to defend anti-Arab racist Avigdor Lieberman against a protest by the Palestine Solidarity Campaign. Afzal boasted that he and his fellow Lieberman supporters had physically driven the PSC protestors out of Hendon.

Usama Hasan is all in favour of the right to freedom of expression when he himself wants to exercise it, but it appears that he doesn’t have any objection to people like Hasan Afzal who have no hesitation in denying that right to their opponents. 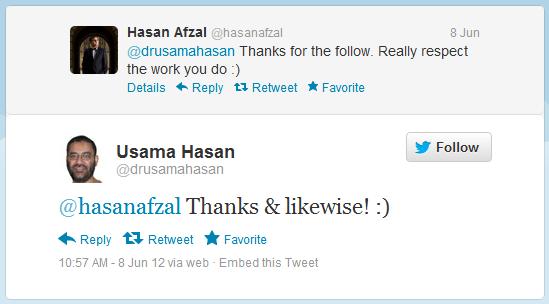