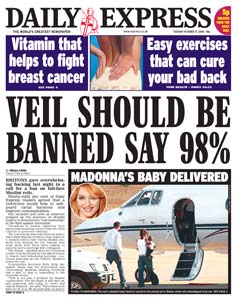 “Britons gave overwhelming backing last night to a call for a ban on full-face Muslim veils. Ninety-eight per cent of Daily Express readers agreed that a restriction would help to safeguard racial harmony and improve communication. Our exclusive poll came as ministers stepped up the pressure on Muslim leaders to demonstrate ‘real leadership’ in the fight against extremism….

“Communities Secretary Ruth Kelly dismissed claims that the Government was ‘demonising’ Muslims, insisting everybody had a part to play in responding to the extremist threat…. Culture Secretary Tessa Jowell said women who covered their faces were failing to take their full place in society. ‘The veil is a symbol of women’s subjugation to men,’ she said. ‘Women who are heavily veiled, whose identity is obscured to the world apart from their husbands, cannot take their full place in society’.”