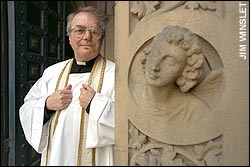 A Church of England vicar could face disciplinary action for saying gay men should have “sodomy” warnings tattooed on their bodies. The Rev Peter Mullen, who is a parish priest and rector in the City of London, made the remarks on his blog, which has since been removed from the web under an agreement with diocesan officials.

In a previous posting Mullen anticipated an “agreeable carnage” at the start of the annual Hajj, the Muslim pilgrimage to Mecca. “They usually manage to stampede and slaughter quite a few hundred of their co-religionists. Just imagine for a moment what a field day the BBC and the leftwing press in England would have if anything even remotely as bad as that happened in Vatican Square at Christmas or Easter.”

Mullen criticised the lack of jokes about Islam in the media, remarking that adherents “certainly lend themselves to ridicule: sticking their arses in the air five times a day. How about a few little choruses, ‘Randy Muslims when they die/Find 70 virgins in the sky’?”