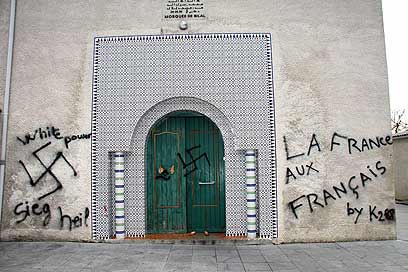 Police say assailants have scrawled a Nazi slogan and hung pig feet on a mosque in southern France. Interior Minister Brice Hortefeux has denounced the “vile and racist desecration” of the mosque in the town of Castres.

Police say the swastika in black paint and slogans including Hitler salute “Sieg Heil” in German, “France to the French” in French, and “White Power” in English were scrawled on the mosque.

Hortefeux said Sunday any person found responsible for the overnight desecration should be “severely punished.”