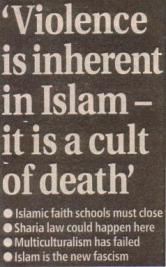 Thus the headline to an interview with Ayaan Hirsi Ali by David Cohen in today’s London Evening Standard. The strap reads: “Human rights activist Ayaan Hirsi Ali issues a stark warning about the growing threat of Muslim extremism in Britain”. Bullet points under the headline are:

Cohen tells us: “Having grown up within Islam, Hirsi Ali believes she is uniquely placed to warn the British public that they are living under a ‘great deception’ about the true nature of Islam. ‘They have deceived themselves that the men arrested in the beheading plot last week and the 7/7 bombers are a fringe group of radical Muslims who’ve hijacked Islam and that the majority of Muslims are moderate. But they’re not. The plot to murder Muslim soldiers in the British Army is consistent with the purest teachings of Islam’.”

Violence is inherent in Islam – it is a cult of death

Ayaan Hirsi Ali, never one to shrink from controversy, has some words of advice for Prime Minister Tony Blair. ‘Close the Islamic faith schools today,’ she says. ‘Britain is sleepwalking into a society that could be ruled by Sharia law within decades unless Islamic schools are shut down and young Muslims are instead made to integrate and accept Western liberal values.’

Hirsi Ali, 38, the Dutch-Somali human-rights campaigner who lives under 24-hour police protection and is in London to promote her provocative new book, Infidel, argues that Catholic and Jewish schools can stay because the values they teach are not a threat to liberal democracy. ‘I haven’t seen anybody coming out of a Catholic or Jewish school advocating violence against women or homosexuals, or wanting to murder innocent people in the name of their religion.’

Having grown up within Islam, Hirsi Ali believes she is uniquely placed to warn the British public that they are living under a ‘great deception’ about the true nature of Islam. ‘They have deceived themselves that the men arrested in the [alleged] beheading plot last week and the 7/7 bombers are a fringe group of radical Muslims who’ve hijacked Islam and that the majority of Muslims are moderate.

‘But they are not. The plot to murder Muslim soldiers in the British Army is consistent with the purest teachings of Islam, which encourages you to kill Muslims who join the infidel army. Violence is inherent in Islam – it’s a destructive, nihilistic cult of death. It legitimates murder. The police may foil plots and freeze bank accounts in the short term, but the battle against terrorism will ultimately be lost unless we realise that it’s not just with extremist elements within Islam, but the ideology of Islam itself.’

But surely she must see, I counter, that the majority of British Muslims are moderates? Sitting in her publisher’s office in an elegant grey-flannel trouser suit and pearl earrings, she fixes me with her lucid brown eyes. ‘If the majority are moderates, why did the Muslim community never take to the streets to abhor the 7/7 bombers? Why is it that the only time we see Muslims protesting en masse is when Islam is allegedly insulted, like with the Danish cartoons, or the Pope’s comments?

‘I’ll tell you why: because Islam is the new fascism. Just like Nazism started with Hitler’s vision, the Islamic vision is a caliphate – a society ruled by Sharia law – in which women who have sex before marriage are stoned to death, homosexuals are beaten, and apostates like me are killed. Sharia law is as inimical to liberal democracy as Nazism. Young Muslims need to be persuaded that the vision of the Prophet Mohammed is a bad one, and you aren’t going to get that in Islamic faith schools.’

Suddenly Hirsi Ali halts her no-holds-barred polemic, a quizzical look creasing her brow. ‘When will this interview be published?’ When I tell her, she breaths a sigh of relief and in a rare moment of caution, says: ‘Whew! Thankfully I’ll be out of the country! I don’t know what’s possessed me, but I’ve been more forthright with you than in any other interview so far.’

It is two years since I last interviewed Hirsi Ali and now, like then, I am struck by the contrast between her physicality – soft voice, waif-like figure, and perfectly manicured long fingernails – and the explosiveness of her rhetoric. If anything, she is more inflammatory and hardline now than she was then.

Yet, as she reminds me, a lot has happened since we met, including the murder of Theo van Gogh, the Dutch film-maker who made her film, Submission, in which verses from the Koran of a man’s alleged right to beat his wife are superimposed on an actress’s body.

Van Gogh’s assassination in late 2004 propelled Hirsi Ali from being well known to world famous, because plunged into his chest by his Dutch Moroccan killer, Mohammed Bouyeri, was a knife with a letter addressed to her, warning that she was next. The political fallout from this public death threat has dramatically affected her life ever since and has made her into the new Salman Rushdie.

It costs the Dutch government about 8 3.5 million (£2.5 million) to provide armed guards for her round-the-clock protection, she says, and it means that she lives ‘in fear and looking over my shoulder’, but insists it’s a personal price worth paying. Initially forced to flee to a safe house, her neighbours hounded her out, saying her presence put their lives (and real estate stock) in danger. The ball that began rolling that day has led, via a few detours, to her leaving Holland, where she’d served as an MP for the conservative Liberal Party, and taking a position as an analyst at the Right-of-centre American Enterprise Institute in Washington DC.

To some, like Time Magazine, which in 2005 proclaimed her one of the ‘100 most influential people in the world’, she is venerated almost as a prophet, certainly as a hero. But to others she is reviled as a troublemaker, Islamaphobe, and someone who simply transmigrated from one extreme position on Islam to another. She has certainly travelled far: from the privations of Africa to the West, from devout Muslim to apostate, from a five-year-old girl subjected to the mutilation of circumcision and arranged marriage to fervent defender of women’s rights.

But is it true, I ask, that she ‘regretted’ writing Submission, as claimed by a British national newspaper in its headline last week. She seems surprised to hear this. ‘I absolutely wish that Theo had not been killed,’ she says. ‘But I don’t regret that I made it. In fact, I’m proud of that film. To feel otherwise would be to deny everything I stand for.’

Recently, says Hirsi Ali, she met Salman Rushdie at a writer’s festival in Manhattan and confessed that as a Somali Muslim in 1989, she had supported the fatwa against him. ‘Rushdie said that if I can believe he should be killed in 1989, and now believe what I do today, it fills him with optimism because hopefully other Muslims will follow the same path.’

When I ask Hirsi Ali why she’s become even more outspoken since we last met, she says that it’s because she’s realised that ‘being diplomatic and politically correct’ gets you nowhere. ‘The world is now in a far more dangerous position than it was then. Hamas is in power in Palestine, Iran is ruled by Mahmoud Ahmadinejad, and in the West, we are engaged in a war against the enemy within as well as without.

‘The mistake that Blair and Bush made is that they called it a War on Terror, whereas in fact, it’s a War on Islamic Fascism. It’s a war of values and the only way we are going to win it is to be honest about what we are fighting. This plot to behead Muslim army recruits is a warning to all potential recruits and it can be supported by what is in Islam.’

Hirsi Ali says that on current projections of immigration growth and birth rates, British Muslims will be the dominant group within the next 50 years. A recent poll, in which 40 per cent of young Muslims said they would prefer to live under Sharia law, and a majority said they were in favour of women taking the veil, should worry liberals.

‘We risk a reverse takeover. In 50 years, a majority Muslim society could democratically vote for Sharia law, and then what you face is that Britain will slowly start to look like Saudi Arabia. Women will be veiled, driven away from the public sphere, polygamy will be rife.’

She takes in my sceptical look and says: ‘You think it can’t happen? The problem with liberals is that we believe other people are as reasonable and tolerant as we are. How naive is the self-deception of the West to continue to talk of moderate Islam? We’re trying to appease Islam, but we are headed for a terrible confrontation between fascist Islam and Right-wing fascists who will step in when liberals fail to do so. Why do Britons think that what happened in the Baltics,with fascist Right-wingers murdering Muslims, can’t happen here? It can, and it will, unless we stop burying our heads in the sand.’

But there is a glimmer of hope, she says, borne out of the increasing realisation that multiculturalism has failed in the UK. So what does she believe should be done?

‘We have to fight their values with ours,’ she says. ‘We have to persuade young Muslims that liberal democracy is superior, that what the Prophet Mohammed said is not right, that the Koran is a man-made brutal doctrine of death whose time has long passed. We have to show the next generation of Muslims, the children, that they have a choice and to do that – to have any hope whatsoever – we have to close down Islamic faith schools.’

Unsurprisingly, Hirsi Ali says she is much happier living in America than in Europe, because ‘people really appreciate what I do, and the personal risks I take, whereas here they prefer to shoot the messenger.’

When I ask how she sees her role going forward, she begins talking to me about her new book. Indeed, it is typical of her honesty – and infamous lack of tact – that, within earshot of her publishers, she tells me that Infidel, a book detailing her life story, is ‘far less interesting’ than the philosophical one she’s currently writing, called Short Cuts to Enlightenment.

‘Its about the Prophet Mohammed waking up in the New York Public Library and having his absolutist ideas challenged by John Stuart Mill, Frederick Hayek and Karl Popper, my favourite liberal thinkers,’ she says.

Do they convince him? She smiles. ‘No, they don’t. But something happens to throw the Prophet Mohammed into doubt so that by the end of the book, he’s no longer completely convinced by his own dogma.’ She pauses. ‘I suppose that is the most I can do – creating chinks of self-doubt where previously there was none. I can start the revolution within Islam but it will be up to others to finish it.’